Thanks to Toby Whitty for providing the following Spanish perspective

A clatter of hooves, a swirl of dust, gold lace and canary yellow announced the arrival of a messenger from the Prince of Anglona’s cavalry screen. The young lieutenant bounded forward to the group of dignitaries ranged around His Excellency Don Vicente Cañas y Portocarrero, Duke del Parque and proffered greetings:
“Excellency! Los Gabachos approach! Our guerilleros were correct, it is Marchand and their Fourth Corps, some 9,000 infantry, 30 guns and perhaps 2,000 horse… Your orders, Excellency?”

Don Vicente downed the last of his fino, and rose as Blanco, his orderly, brushed the last stray remains of breakfast from his tunic and buttoned it whilst His Excellency addressed his senior staff.

“Caballeros! We face a difficult task… though we outnumber these bastardos, hold this ridge and whatever that place calls itself…”
“Tamames, Jefé” murmured Blanco.
“…. let’s not fool ourselves, the French are seasoned troops whereas most of ours are conscripts and reserves.” This was greeted by mumbles of resigned affirmation. 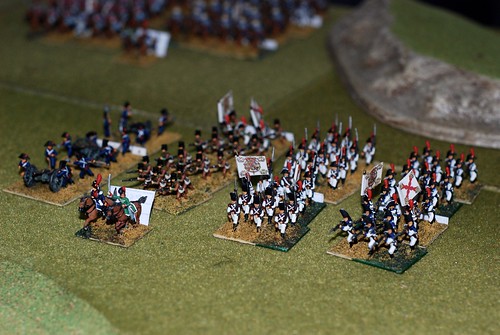 “and if we are to triumph today we must convince both the French and our own men that this is not the case.”
Turning to Major General Castrofuente the Duke continued, “Don José, you will garrison the town and hold the ridge behind, we know those men are probably lost already but their sacrifice may hold the French from taking the ridge.” The marqués nodded his assent.
“Don Francisco, your Third Division must hold the ridge and broken ground to our right at all costs whilst you, General Belvedere, are to hold the centre of the ridge and be prepared to support Don José at Tamames or General Ballesteros to your right. I shall join Don Pedro’s cavalry brigade. Caballeros, to your posts! Viva el Rey! Viva España!”

The French columns in the distance, confident of victory, advanced in a dilatory fashion allowing the Spanish to adjust their line on the right and pull it out of range of the French guns. Meanwhile on the left, Don Vicente began moving the cavalry in a bold demonstration to the left of the ridge in support of Castrofuente’s division in Tamames, it’s scant skirmish screen already being pushed back by a strong French advance of their light troops.

Whilst the appearance of the Spanish cavalry atop the ridge did indeed seem to give the French pause, two brigades were advancing rapidly upon Major General Ballesteros’ troops. A ripple of fire erupted from the Spanish line but the clearing smoke revealed that the conscripts and second line troops had fired too high and the French pressed on unscathed, it seemed their determined assault would sweep the ridge clear of Spaniards in short order. As an aide failed dismally to find Don Vicente to deliver the desperate plea for Belvedere’s men to reinforce the situation on the right, the situation looked perilous.

However, with a remarkable show of discipline Ballesteros’ regiments took their time to reload in the face of the oncoming French columns and unleash some telling volleys at last. The columns halted uncertainly at the top of the ridge. Meanwhile it appeared that the Duke del Parque was struggling to understand the urgency of Belvedere’s message and still seemed unwilling to release troops to shore Don Francisco’s position. For a fretful, desperate while longer Ballesteros’ men were forced to look to their own resources to stem the French onslaught but as if by a miracle,suddenly, some of the French began to falter, then retreat. In one brigade the retreat turned into dissolution as a regiment lost all cohesion and scattered, followed soon after by another, the divisional artillery pulling back in disarray too.

At last Belvedere’s reserve forces received the orders to advance to support the right though with the appearance of fresh French troops heading toward Ballesteros’ fragile conscripts it seemed in doubt that they would make it in time. Another French brigade in ordre mixte was also advancing in a menacing fashion upon the centre of the Spanish line, would they continue up the ridge or swing to envelop Tamames? Del Parque barely hesitated before swinging the cavalry from the left to cover both eventualities, forcing one regiment to form square and whilst the defenders of the town began to pepper them with musketry, Belvedere’s remaining men met the other French regiments with musket fire and grapeshot.

Meanwhile on the Spanish right, under sustained fire the already weakened French brigade dissolved but as cheers rose from the Spanish ranks they just as quickly faded as two French regiments crested the ridge, scattering opposition and establishing a firm lodgement and routing the plucky conscript regiment they faced. Even worse, the French cavalry began to trot, then gallop forward to exploit this success looking to sweep the ridge clear. Before that could happen and to the amazement of all, the routing conscripts halted, reformed and advanced once again to rejoin the Spanish line in the desperate struggle to throw the French back from the ridge. Belvedere’s supporting troops began to arrive and sway the tide. Bloody exchanges of fire erupted, the French cavalry’s advance became telling, forcing retreats into the broken ground further back on the ridge and a charge seemed set to silence the Spanish artillery but at last the French nerve broke as the cavalry faltered and the infantry began to fall to sustained musket fire. With two broken brigades, grudgingly the French began the withdrawal of their remaining regiments, leaving the Spanish a glorious victory. 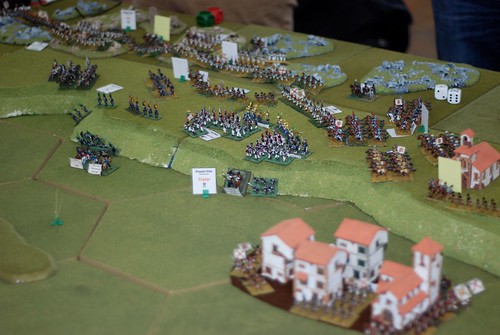