June’s Big Game – ACW Clash at MacPherson’s Ridge – has been and gone and from all accounts was a smashing success.

What follows is an after action report from Pete Connew, with photos. An album of photos from the day can be found on Flickr.

An unbiased account of the re-fight from POV of Gen Buford commanding 1st US Cavalry Division.

Historically for the CSA Heth’s division from Hill’s Corps did not expect much more than ‘home guard/militia’ as they marched towards Gettysburg along the Chambersville Pike. Reports of regular cavalry units were poo-poo’d by Hill and Heth. So it was a simple day’s march to go buy some shoes. Having no cavalry screen Heth elected to a tried solution in case militia barred his way – lead with the full divisional artillery (all 5 batteries). Approaching Gettysburg Heth ran into 2 of Buford’s brigades and a delaying firefight for Heer’s ridge (all of 12 foot high) then on into McPherson’s ridge just West of Gettysburg. 7,500 CSA infantry bested, but did not break,the 2,500 or so cavalry whose beech loaders multiplied their effect. 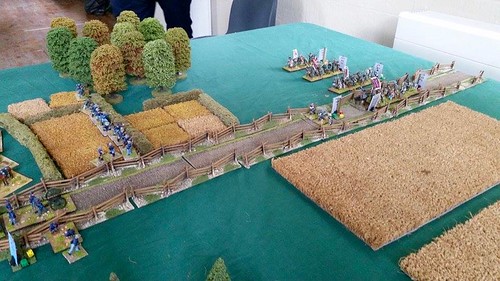 Meanwhile 1st Div of 1st Corps were making a fast pace and arrived on McPherson’s ridge in time to hold Heth’s attack. By late morning other Union commands were arriving on the scene and the stage was set for the set piece battle that afternoon on Seminary ridge.

Our game was based on historic organisation and numbers also terrain and the timing of Union Infantry on the ridge. James Honey, as Heth, was given a freer choice of order of march and elected to place at least 1 brigade (of 4) of his infantry at the sharp end.

The game stated well in that the Federals held the dice advantage until turn 6. That meant Buford was able to send Gamble and Devin’s cavalry forces well down the turnpike and delay Heth from move 1. 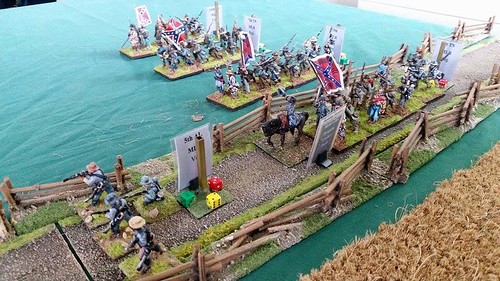 By turn 9 Devin’s brigade had been pressed eastward across the Heer ridge, time for Gamble to take up the strain…but two factors developed, Gamble’s ability to throw no 6s – coupled with a lack of ready ammunition. 3 of his 4 units were low on ammo by turn 14 and heading east to McPherson’s ridge or even further. 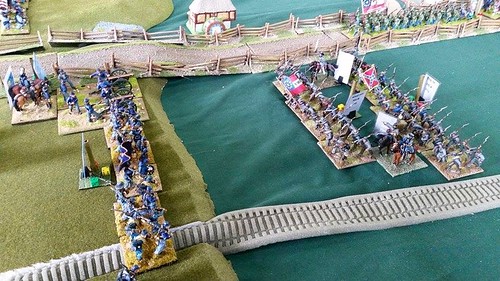 But by now the lead elements of Reynold’s 1st Div were approaching the rear (east) of McPherson’s ridge pausing only to make rude comments about the cavalry as they rode away from the enemy, the Iron brigade established itself on the ridge line and awaited the attack.

Well it came but at significant expense to the CSA. Their first attack cost an entire regiment, their second better coordinated broke down south of the turnpike as it crossed the sights of enplaced artillery into sustained fire from the veterans of the Iron Brigade. North of the turnpike a combination of artillery and ‘plucky’ (not fluffy as one officer mis-heard) New York volunteers turned back and routed more CSA regiments.

Time was called at 13:30 Gettysburg time (move 24) without a CSA foothold on McPherson’s ridge but with casualties nearly as rich as historically with 5 battle-tested regiments wiped from the order of battle. The day was given to the Federals who recognized that a withdrawal to Seminary Ridge was looming during the early afternoon as CSA reinforcements arrived although perhaps without any close pursuit. 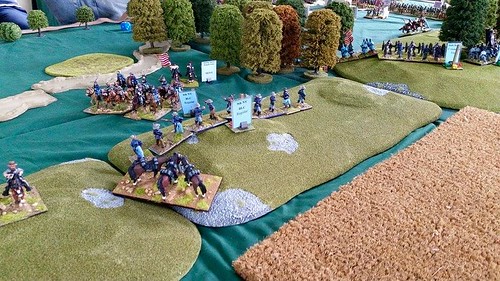 A good game and more finely balanced at times than the clear result might suggest.

Now for the headlines….

Luckiest General – Simon ( 4 occasions where a risk to General emerged in the game and Simon’s general deflected 3 of them).

General who needs new dice – Richard ( snake eyes for out of ammo 3 times and whose other shooting, looking for 6s, suggested he was using average dice).

And Jerry has added some comments…

“Can you hold them?”
“I reckon I can…”
Conversation allegedly said between Cavalry Divisional Commander Buford & Corps CinC Reynolds on the morning of the battle.

Cavalry operating on a scoot-&-shoot mission to harass, delay & vex the Confederates, between rolling hills that hid troop placements & many natural obstacles.

Chased by Confederate columns in vain for the most part, 1/2 move, remount & move to next delay point.

Aided by strategically placed Horse Artillery Gun Sections, accurate skirmish fire & Artillery whittled away at the Confederate forces until the losses became considerable. When the 1st Division arrived in the nick of time to secure either side of MacPherson’s Ridge & added their withering volleys, Davis Brigade on the North side of the Turnpike was breaking under the strain & Archer’s Brigade on the South side was in a similarly poor state.

Outstanding Unit of the day: West VA Cav unit of 1 skirmish group who scored more hits than any other skirmish unit.

Outstanding moment of day: When Richard threw a pair & a single skirmish firing dice & scored: 1, 1, 1 to run low on ammo.

Disappointing moment of Day: When no Brigadier or higher were killed during whole battle, barring some light wounds that were shrugged off as a ‘scratch’

Close Shave of the Day: When the Confederate Brigade Wave Charge came perilously close to contacting the brittle part of Cutler’s Brigade on Macpherson’s Ridge

Predictable moment of day: When Union won Initiative roll 4 times out of every 5. Having Excellent Commanders over Confederate Poor Commanders prolly helped a little ….