Yesterday saw three games take place: a Bolt Action skirmish, a The Men Who Would Be Kings colonial battle and an 18th century “Imagination” game using the Maurice rules. Everyone seemed to have a good time at their respective tables. 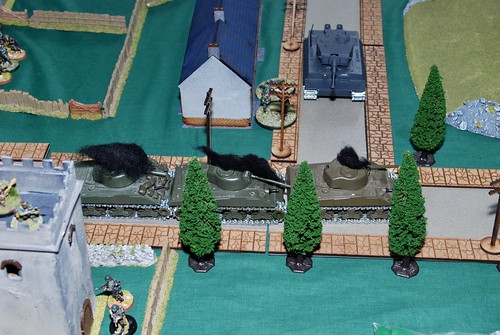 A small selection of photos from the day can be found on Flickr.

Pete has provided the following After Action Report for the Bolt Action game:

Daring groups of the 101st airborne had identified a Divisional HQ based in a sleepy valley but were too lightly armed to challenge the German garrison. So they called for help.

Which came in the form of elements of Combat Command B 236th Infantry Regiment. This was lead by Lt.col Jerry.A.Hopeful. Which infantry school the man went to was obviously the same one as Larry Hagman (The Eagle Has Landed) and David Schwimmer (Band of Brothers) attended. For the armour went forward and got ahead of its infantry – and the recce – and didn’t trouble to make smoke as it drove boldly through the village which lay a kilometre or so north of the Chateau. I say through – most of the M4 wrecks lay within the village boundary and there the right flank attack bogged down. But not before the valiant paras broke cover and attempted to assault both the chateau and the german artillery lines expecting support. Only to be hit by massive fire and forced eventually to withdrawn into the woods.

The US left flank advance meanwhile had tried hard to find a way around the village, taking backroads and even a rickety pedestrian bridge only to find dragons teeth blocking their way. Oh and a PzIV. The duel between the PzIV and the solitary M5 (Stuart) did last a couple of turns but with the smoke from the M5 blossoming and covering the lighter recce troops as they retired the game seemed to be slipping away from the Americans.

Undeterred, the last remaining unengaged US AFVs (105mm SP Guns) attempted to move forward in support – “It’s going all right so far” was the message across the radio airwaves from Col Hopeful who seemed to have his nose in a history book working out if his forebears had owned the chateau. Well two moves on it may have gone astray. The US 105mm artillery was met on the move by multiple mortars and quietly removed (written down) as the last chance saloon closed

….but not before the Tiger 1 who had been responsible for about half the AFV casualties had a final exchange with the 57mm A/T gun crew manning the last offensive weapon in the US armoury. Hitting with its MG at near extreme range the 3 man gun crew thought it might be rough before they could return shot …and so it was with 3 casualties being taken and the gun left unscrewed.

“So we’ll call it a draw then” suggested the 236th’s executive officer. The 101st’s reply was unpublishable but did include the point that they had destroyed more AFVs than all 236th together!. Indeed the ONLY AFVs to be destroyed.

German forces tried to comment but Lt. Richard “Tiger” Witmann had to keep the handkerchief in his mouth to avoid bursting into laughter. Oberst James “Milk and Honey” did manage the suggestion that the Oak cluster for his Iron cross would look very nice.

Thanks Jerry, James, Simon, Mark, Alex and Richard (and Neil for his dice picking) for a day which left the rules in one piece and generally a good feeling for the sport.

Hopefully the players on the other tables will feel inspired by the above to submit AARs of their own.

November sees the return of Mission Command from Alan, Napoleonic Naval hi-jinks from Steve and I believe more colonial period action as well. More details at they become available. As always, if you’d like to play any of these, please let Pete know, so we can make sure everyone is properly prepared.

Until next time.
Neil.