Thanks to Toby Whitty for the write-up of the Maurice game from last Saturday. 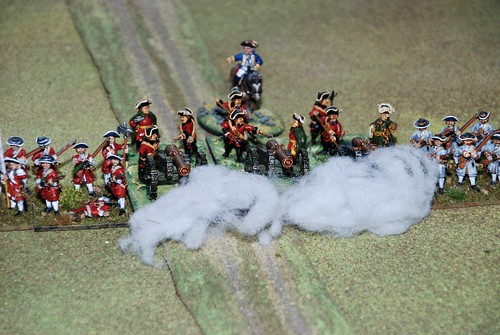 Preamble: “Maurice” is a very innovative rules system to play games of 18th C warfare concentrating on the difficulties of command and control. More information about the rules themselves is here: http://www.sammustafa.com/honour/modules-games/maurice/

Our game was part of Chris and Niall’s long running Wars of the Gelderland Succession campaign, an “Imagi-Nations” style campaign à la Charles Grant based around the warring nations of Mittelheim, that bit of Central Europe generally overlooked in most 18th C histories. More background and detail in Chris’ blog here: http://mauricecampaign.blogspot.co.uk

The campaign took a new turn with the recent re-emergence into the family of nations of the Voivodate of Vulgaria after half a century under the heel of Herzo-Carpathia. After years in exile the ancient line of Feratu-Osterberg has returned, the Vulgars have thrown off their shackles and sadly neighbouring countries have decided to see if they can exploit the precarious situation that the new, young, Voivode finds himself in. The latest battle to almost interest the rest of Europe came about as the Prince-Palatine of Saukopf-Bachscuttel, eyeing the recent innovations in Vulgarian pig production, sent his army under the renowned general Graf Redmond von Barry-Eyland onto the plains of Vulgaria. News soon reached Schloss Feratu and the invaders were soon confronted by a hastily cobbled together Vulgarian force under the young Voivode’s confidante and military advisor the Dutchman General Hertz van Rentall.

The experienced Bachscuttlers put their main strength into their formidable infantry, regarded by many as the most competent and experienced force in Mittelheim, headed by two guard regiments. Outnumbered and inexperienced in comparison to the Bachscuttel infantry, the Vulgars view cavalry as their principal arm and held preponderance in horse with the Garde du Corps of von Ruthven’s Osterberg Cuirassiers, three well-trained cavalry regiments and two irregular cavalry regiments, thus having a two to one advantage.

The battlefield was arrived at following cat-and-mouse manoeuvring as each side sought an advantage in the ground. Eventually Graf Barry-Eyland’s skill and experience enabled him to make the most of the scant terrain offered by the Vulgarian Plain and position his force with his right flank protected somewhat by a looping stream and stationed two regiments of irregular foot in a wood protecting his left to some extent whilst a small patch of boggy ground some way to his front might serve to disrupt the Vulgarian advance. (There is a sort of game-within-a-game at the beginning which compares things like the relative skill of commanders, numbers of irregular scouting forces in a given terrain type to arrive at the number of terrain pieces that must be placed on the table. In this instance Chris’ “Great Captain” attribute for his commander served to nullify my advantage in cavalry scouts).

Battle in earnest began with the traditional bombardment of enemy forces. The Vulgarian artillery under the skilled eye of van Laurent, another of the Dutch notables favoured by the Voivode, commenced by delivering a cannonade that caused some consternation to the Bachscuttel guard unit opposite. Graf Barry-Eyland was heard to emit “a great oath” at this but honour was soon evened as the Vulgarian Lord Grand Prior’s Regiment received fire in return.

Vulgarian morale dipped briefly as a dastardly Bachscuttel sniper cut short the career of dashing beau sabreur Baron Tostov, however, with a curt speech regarding the advisability of wearing such garish pantaloons in close proximity to the enemy van Rentall swiftly raised his men’s spirits.

Van Rentall, seeing an advance by his outmatched infantry as foolish, determined on a thrust to his right by his combined force of irregular foot and horse with the aim of clearing the wood of Bachscuttel irregulars before they ate all of the squirrels. This action, interspersed with occasional bombardment took up the early phases of the fight as Graf Barry-Eyland contented himself with (largely ineffectual) bombardments of his own. Vulgarian hussars and irregular foot pressed the attack but Bachscuttel’s jägers put up stout resistance, repulsing the initial charge but powerless to stop a second hussar regiment threatening the main Bachscuttel flank. The Graf was forced to wheel an infantry regiment, contracting his flank, and to post cavalry to reinforce the position.

The fight for control of the wood degenerated into a protracted exchange of volleys which only gradually saw the Vulgarians gain the advantage with the dispersal of one of the opposing regiments. Realising that impetus was slipping, van Rentall now threw his efforts into a cavalry push around the Bachscuttel right flank. At first glance this appeared a reckless manoeuvre as the Vulgarian horse would have to ford the stream not once but twice before being able to come to grips with their foe, however, the Dutchman had begun the battle with a loyal local able guide his men across in exchange for retaining an unburnt roof to his hovel.

In the centre the Lord Grand Prior’s Regiment finally succumbed to the sustained Bachscuttel bombardment and although his newly established Depot Battalions would soon refill the ranks van Rentall realised it was another sign that the attack was in danger of losing momentum. Without more ado van Rentall launched the cream of Vulgarian horseflesh, led by von Ruthven’s Osterberg Cuirassiers, hoping to strike the blow that would decide the day. Matters hinged on whether the Vulgarians would make good their advance and press their charge before the Graf could react. As ever, though, the wily Bachscuttler was not one sit idle whilst the enemy sought his flank and reacted by refusing his rightmost infantry and stationing cavalry almost at the stream bank. As a consequence when the Vulgarian onslaught came von Ruthven’s troopers were hampered somewhat by having to fight mired in the stream and despite gaining the better of the fight the Bachscuttel cavalry held long enough to force the cuirassiers to withdraw to regroup for a further assault.

Seeing that further charges might break the stream line but would almost certainly pit his spent cavalry against fresh infantry, van Rentall considered that it was not worth throwing Vulgarian lives away against the Graf’s much strengthened defences. His men having acquitted themselves well General van Rentall proposed Honours of War and ordered his men from the field. Once again Graf Barry-Eyland had cemented his reputation for finding a defensive position on the most unpromising ground, it is this that has earned him the nomme de guerre “The Mole of Mittelheim”, either that or the huge, unsightly growth in the centre of his face.