Sunday November 27, 2016 saw myself, Pete, Richard and Steve head to Lincombe Barn Folk House, Downend, Bristol for Reveille 2016 to put on a Zulu Wars demostration game using the Osprey Games rules, The Men Who Would Be Kings.

We managed to play three games of the scenario “Intombe River: The Rematch”, though due to what was later described as a “times table error”, the fist couple of games resulted in the complete massacre of the Zulu forces by the British, with the loss of almost no casualties! (A total of about five across the two games).

Once a rebalancing of the forces was undertaken the third and final game proved to be a much closer affair, though when time was called the British did once again have the upper hand. Open ground really does make things tough for the Zulus to assault British Infantry! 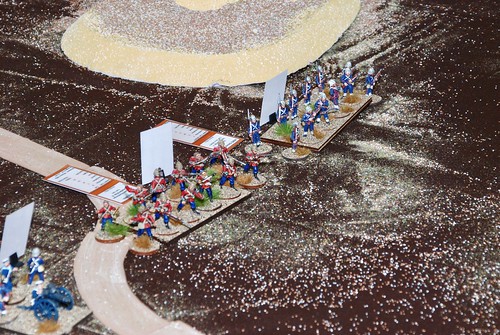 All in all we had a great day, seemed to generate much interest both in the game and the club and have another game to add to the list of offerings when a particular month’s main game doesn’t appeal.

A selection of photos from the game can be found on Flickr.

December sees the club return to a game that hasn’t made an appearance for quite some time: Medic, Medic!

The description from the rules document states:

A fast play set of rules for demonstration games etc. covering modern colonial and intervention actions
Developed from a Mike Slack original idea by Pete Connew of the Abbeywood Irregulars.

Games are set in a fictional 1990s Turkmenistan with players taking on the roles of various United Nations Forces as well as local forces.

From Pete’s description of past games, it seems interaction between the various UN force commanders can play as much a part as boots on the ground (or figures on the tables).

If you are interested in participating, please let Pete know by December 1, so he can balance the scenario accordingly.

A small selection from November’s big game of Mission Command can be found on Flickr.

Thanks to Alan for making the trip down to put the game on and for everyone who participated. It was a close run thing with neither side having really gained the upper hand by the time we decided to draw things to a close. A day well spent.