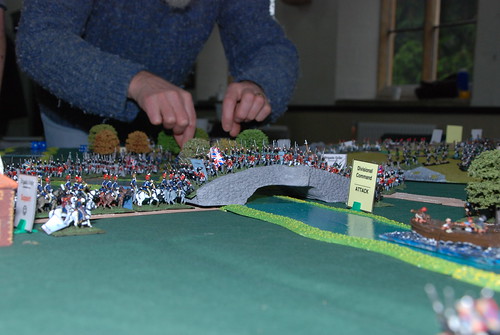 A selection of photos of the game can be found on Flickr.

Pete, who organised the game kindly provided the following recap:

Just to say thanks to all for turning out and filling the Hall.

The Hill at Arinez got to the end of turn 15 (of 20) without a complete conclusion. The French were still in the field although seemingly cramped for room on their deployment and the British also seemed to be tripping over themselves in the rush forward. A tactical position which saw the British in command of both ridges of the Arinez hill and the village itself snuggled between. I’d not call the result beyond that, but others might.

Also being played was an 18th Century period game using the Maurice rules. Toby Whitty provides some details of the days events:

The campaign blog can be found here: http://mauricecampaign.blogspot.co.uk

They are an interesting and enjoyable set of rules that concentrate on the command decision side of battle. Armies are selected spending up to 100 points divided between the usual infantry, cavalry and artillery arms but also up to 30 of the 100 points can be spent on customising the army in terms of doctrine, movement and fighting abilities. It’s possible to select characteristics that affect an army’s tactical performance and also ones that affect it’s campaign chances.

The fight was between the fledgling Vulgarian army and the forces of Nabstria, seeking to gain a quick victory over the inexperienced, newly free nation. The Vulgarians have an army that emphasises cavalry, has a “Maison du Roi” of a footguard regt and a guard cavalry regiment. It’s regular troops are drilled to be able to move obliquely and it’s established Depot Battalions to fill depleted ranks with trained rather than conscript troops post battle. The Nabstrians have emphasised skill with the musket as well as the ability to deploy into formation at the end of movement rather than before.

The Vulgarians were outscouted and began the game as the defenders of some rough, hilly terrain. Evidently the Vulgarian commander, the Dutch general, Hertz van Rentall has spent too much time dallying in the taverns of Osterberg the night before as he set his forces out, little realising how much his initial deployment was flawed. Irregulars occupied the woods protecting his right flank, all looked well. Next, the Guards and von Barlöw’s Rgt. Then three batteries of guns, the Lord Grand Prior’s Rgt, Orlok’s and Blascó’s. Occupying the left flank and facing the open ground were the fine Vulgarian cavalry.

Unfortunately, what hadn’t been banked on was the speed of the massed Nabstrian infantry in march column and their ability to deploy smoothly after movement. These were headed straight at the cavalry wing and van Rentall had been caught flat-footed. This was made worse by the distance between the two infantry forces at his disposal, making command and control a serious problem.

Essentially it was a matter of trying to stem the tide and somehow deploy the right flank infantry in support before Nabstrian numbers totally crushed the Vulgarian left. It looked a hugely difficult task and turned into a grinding confrontation as both sides lost units retired due to firing and push of bayonet. Eventually both sides fought themselves to exhaustion on that flank, both sides with morale wavering until the routing of the Vulgarian Osterberg Guards due to the excellent Nabstrian volley fire.

In campaign terms it was a pyhrric victory for the Nabstrians whose army was badly mauled and will have to call up many conscripts whereas the Vulgarians will be able to replace their losses with trained men. A hard fought slog.

The final game was a colonial period games using a modified version of Osprey’s The Men Who Would Be Kings. Unfortunately no further details are available at this time.

Next month sees the club return to Gettysburg for the afternoon of day one. More details soon I hope.