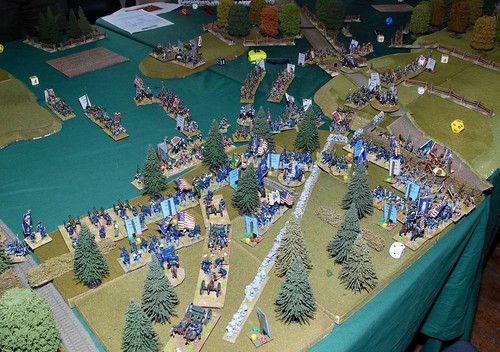 February saw the club return to Gettysburg for the afternoon of day one – Rodes’ Division attack.

A selection of photos of the game by myself and Jerry can be found on Flickr.

Jerry has also kindly provided a battle report of the day’s events:

Union
* To the To the Union Left, Stone’s Bde held McPherson’s Railway Cut, supported by a 3-Gun Rifled Battery & a detached Regt from the Iron Bde.
* To the Union Right, on Oak Ridge, Baxter’s & Cutler’s Bdes held the ridge, though out of sight. Also supported by 2×3-GunRifled Batteries. A hasty redoubt was also on Oak Ridge.
* Paul’s Bde sat on Seminary Ridge in Reserve.

Confederates
* On the Northern edge of the Battlefield were Daniel’s Bde, Carter’s Arty Bde, Iverson’s Bde & O’Neal’s Bde. O’Neal’s Bde is on Oak Hill, opposite Oak Ridge.
* Ramseur’s Bde & another Battery, is in Reserve Off-Table

1st Moves
* O’Neal’s Bde marched in column due south to the bottom of Oak Ridge, Carter’s Arty Bde marched to a gentle hill in the centre & unlimbered, Daniel’s Bde marched up the Mummasburg Rd to support O’Neal, Iverson’s Bde marched & wheeled round the gentle hill.
* Stone’s Bde advanced to the southern bank of the Railway cut, supported by the Battery on their Left & Paul’s Bde on their Right. Baxter’s Bde wheeled right to face O’Neal.

Opening Clashes
* O’Neal’s Bde found out the hard way that being in column is good for moving, bad for being shot at.
* Iverson’s Bde in column of march got a warm welcome from all 3 Union Batteries & rather rapidly formed line.
* Daniel’s Bde sent out skirmishers to ping the nearest Union Battery.
* Unsurprisingly, the casualties taken from shooting caused a Retreat morale failure on ½ of O’Neal’s Bde.
* Daniel’s Bde skirmishers were ineffective, so the columns went in (see above on how columns do in ACW)
* Ramseur’s Bde arrived with the Corps Commander & another Battery, & endeavoured to catch up the rest of the Division.
* Carter’s Artillery began counter-battery fire & scored a palpable hit, blowing up one of the Guns, & causing the Union 1st Division Commander to see the red mist & commit to a one-way charge into the opposing army when he saw his own brother fighting for the enemy. Fortunately, his AdC was the class swot at West Point, & morale improved dramatically!
* Iverson’s Bde soaked up the punishment & did not a lot else
* By hook or by crook, O’Neal somehow managed to rally both Regts & send them in again
* Daniel’s Bde tried a charge against Cutler’s Bde & stopped under the fusillade of minie balls.
* Dick Ewell as Corps Commander removed the DPs from O’Neal’s Bde & this time they got into Line before trying a charge

Endgame
* Union Arty returned the favour by KO’ing one of Carter’s Guns & the Battery & Carter himself in one fell swoop.
* Iverson’s Bde stepped forward & forced the Union Batteries to step back
* Paul’s Bde flanked Iverson’s Bde & threw him back
* O’Neal’s Bde eventually broke through Baxter’s lines & onto Oak Ridge
* Daniel’s Bde finally got a charge in, & followed it up with an uncontrolled charge into Cutler’s Bde that caused grievous pain & grief to that Bde
* Ramseur’s Bde finally caught up with rest of Division
* Stone’s Bde was advancing against the Confederate Artillery.
* Time ran out

Conclusion
* Confederates finally broke through the Union Right & looked as though they might smash through, but the CSA Right was also hanging in the wind, having only Ramseur’s Bde & the Arty to stop two Union Bdes rolling it up.
* So, only a partial victory to the Confederates – Is there going to be a Day 2 of Gettysburg??
* Well done to all the players, hope everyone had fun!

The latest version of the rules used can be found [here](/static/RaisingSumterQRSv6_2Feb 2017.pdf).

Next month we are all at sea but in reduced circumstances due to the main hall being in use.